On May 2014 Peter Steinberger released Aspects inspired (a little :-) by this article and Orta and Ash Furrow improved ARAnalytics with a DSL based, again, on this article -> Tweet 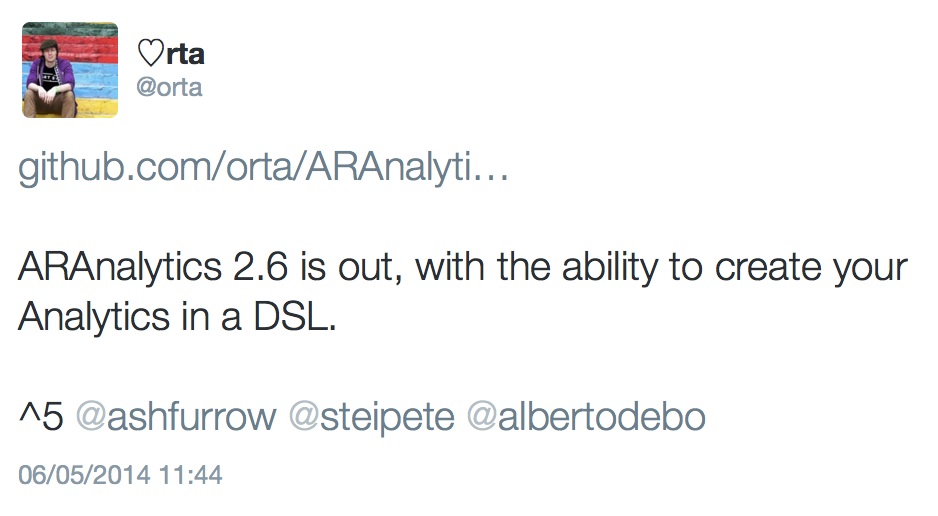 Analytics are a popular "feature" to include in iOS projects, with a huge variety of choices ranging from Google Analytics, Flurry, MixPanel, etc.
Most of them have tutorials describing how to track specific views and events including a few lines of code inside each class.

On Ray Wenderlich's blog there is a long article with some sample code to include in your view controller in order to track an event with Google Analytics:

The code above sends an event with context information whenever a button is tapped. Things get worse when you want to track a screen view:

The idea is based on AOP, Aspect Oriented Programming. From Wikipedia:

An aspect can alter the behavior of the base code (the non-aspect part of a program) by applying advice (additional behavior) at various join points (points in a program) specified in a quantification or query called a pointcut (that detects whether a given join point matches).

In the world of Objective-C this means using the runtime features to add aspects to specific methods. The additional behaviours given by the aspect can be either:

There a few implementations of AOP libraries for Objective-C out there and most of them are failed attempts. The only one I found extremely reliable and well-designed comes from Andras codeshaker at this blog post and on GitHub. We are going to use this library, you can do it through CocoaPods using my public pods repo or copying the podspec I've created for it and add it to your personal repo of internal pods.

The AOPAspect library does some cool magic with the runtime, replacing and adding methods (further tricks over the method swizzling technique).
The API of AOPAspect are interesting and powerful:

For our purposes we need to use just the following method on the singleton instance:

The code above will perform the block parameter after the execution of the instance method myMethod: on the class MyClass (the author pointed out that class methods are still an issue to be solved).

In other words: the code provided in the block parameter will always be executed after each call of the @selector parameter on any object of type MyClass.

We added an aspect on MyClass for the method myMethod:.

Wow! This is a perfect example to apply AOP to track screen views on specific viewDidAppear: methods!
Moreover, we could use the same approach to add event tracking in other methods we are interested in, for instance when the user taps on a button (i.e. trivially calling the corresponding IBAction).

This approach is clean and unobtrusive:

We may want a SPOC file similar to the following (also a .plist file would perfectly fit as well):

The architecture proposed is hosted on GitHub on the EF Education First profile.

This was for sure the most cool tech thing I've coded this year so far and I hope you enjoyed this absolutely-not-well-known approach. That said, there are some cons when adding aspects with the AOP library:

Give this approach a try using the source code provided and you'll be surprised, astonished, delighted.

Actors, these strangers Although we are all in love with Objective-C, the…

CocoaPods [http://cocoapods.org] is cool. I was honoured to have a…