Let's make it clear. This is a post for dummies. There are some others tutorials online but I thought I could write something better focusing on the right details rather than wasting time on a brainless walkthrough. Well… here are my 50¢.

It's since 2008 that I work with the iOS platform and still, when it comes to managing certificates and provisioning profiles within the Developer Portal, I lose my mind. Just like when you start a new bottle of vodka and you cannot remember the entire trip that brought you to the bottom of the previous bottle.

After having read this post you'll hopefully have a better understanding of what and why you need to setup in terms of certificates and provisioning profiles for building an iOS app on device or for archiving for release. If not, at least you have some handy tutorial for dummies.

Everything begins with a CSR

I think the menu title is misleading. We don't actually request a certificate, we are creating a request for it! Create a CSR with common name and a email address. This fields are enough for our purpose. 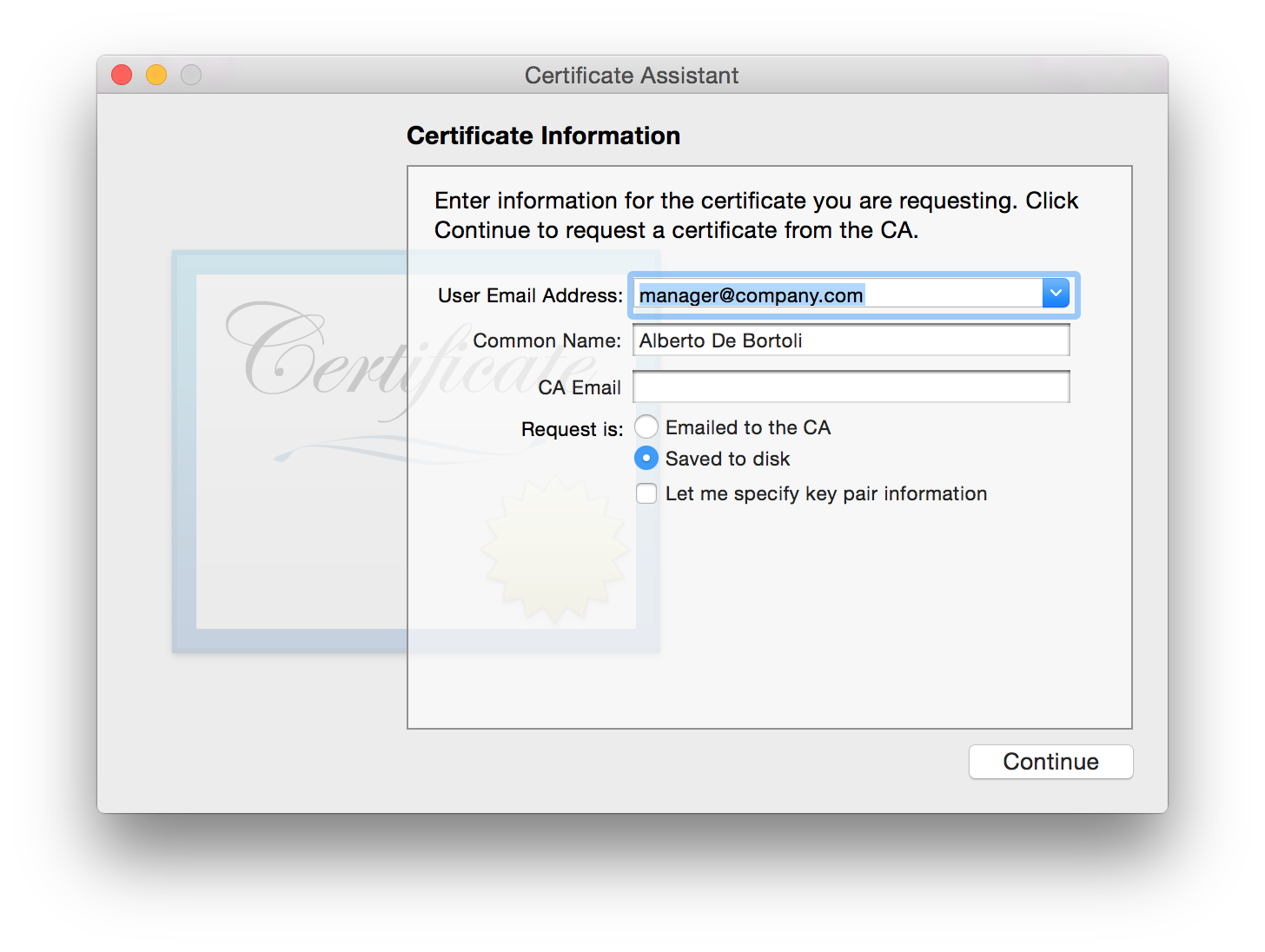 Now in the Keychain Access are also visible the new keys created along with the CSR. They will be 2048-bit by default. The name of the public/private keys is the common name chosen previously. There is nothing linked to these keys yet. These keys are super important data. If you lose them, everything we are about to create will be fuc*ed up. 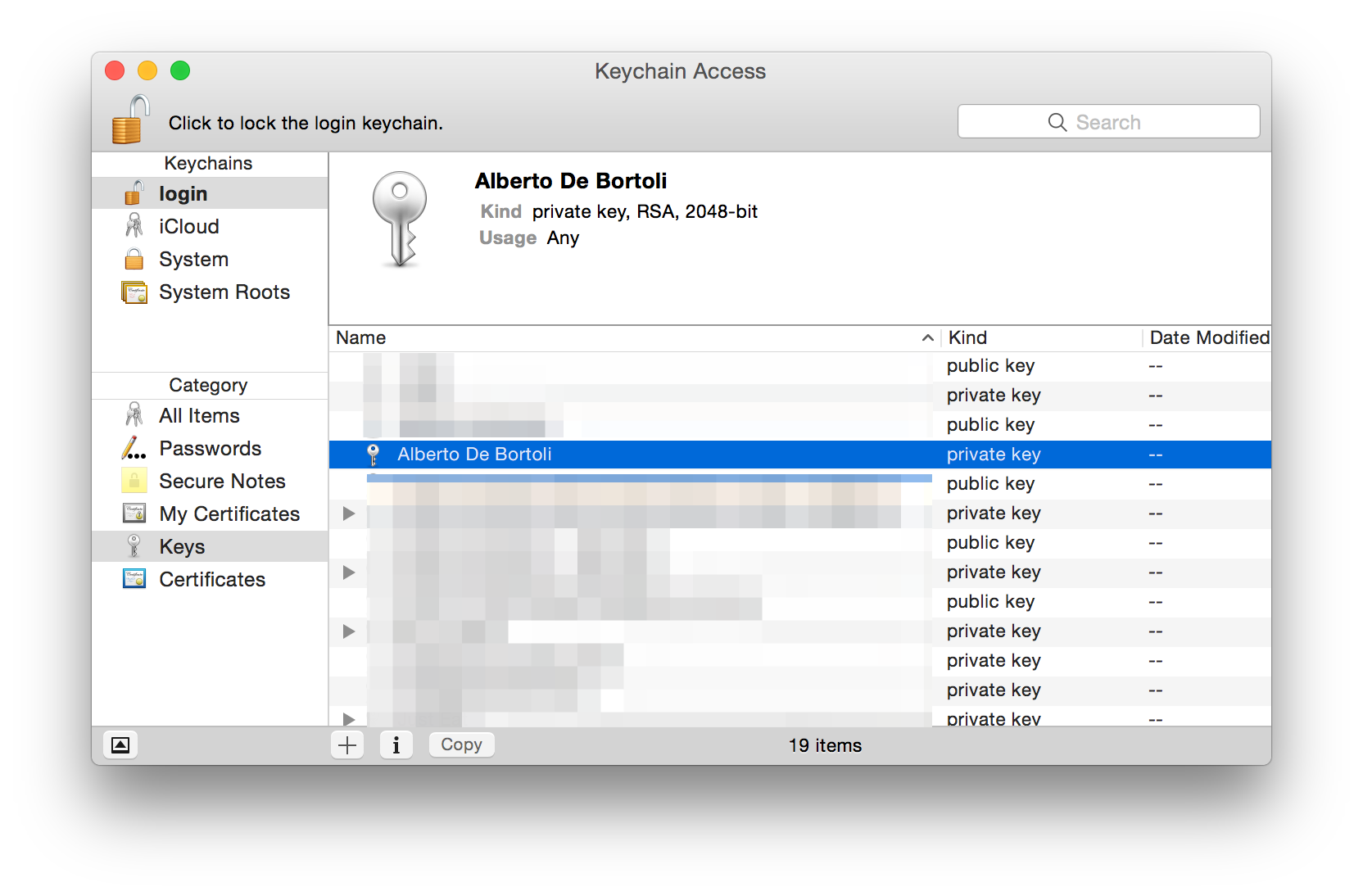 If you missed that lesson about RSA at your Computer Science class, what you need to know is basically:

It's time to go to the Developer Portal and create some stuff.

Sections are Development and Production. Let's go through the steps for creating the development certificate (similar steps apply for production). 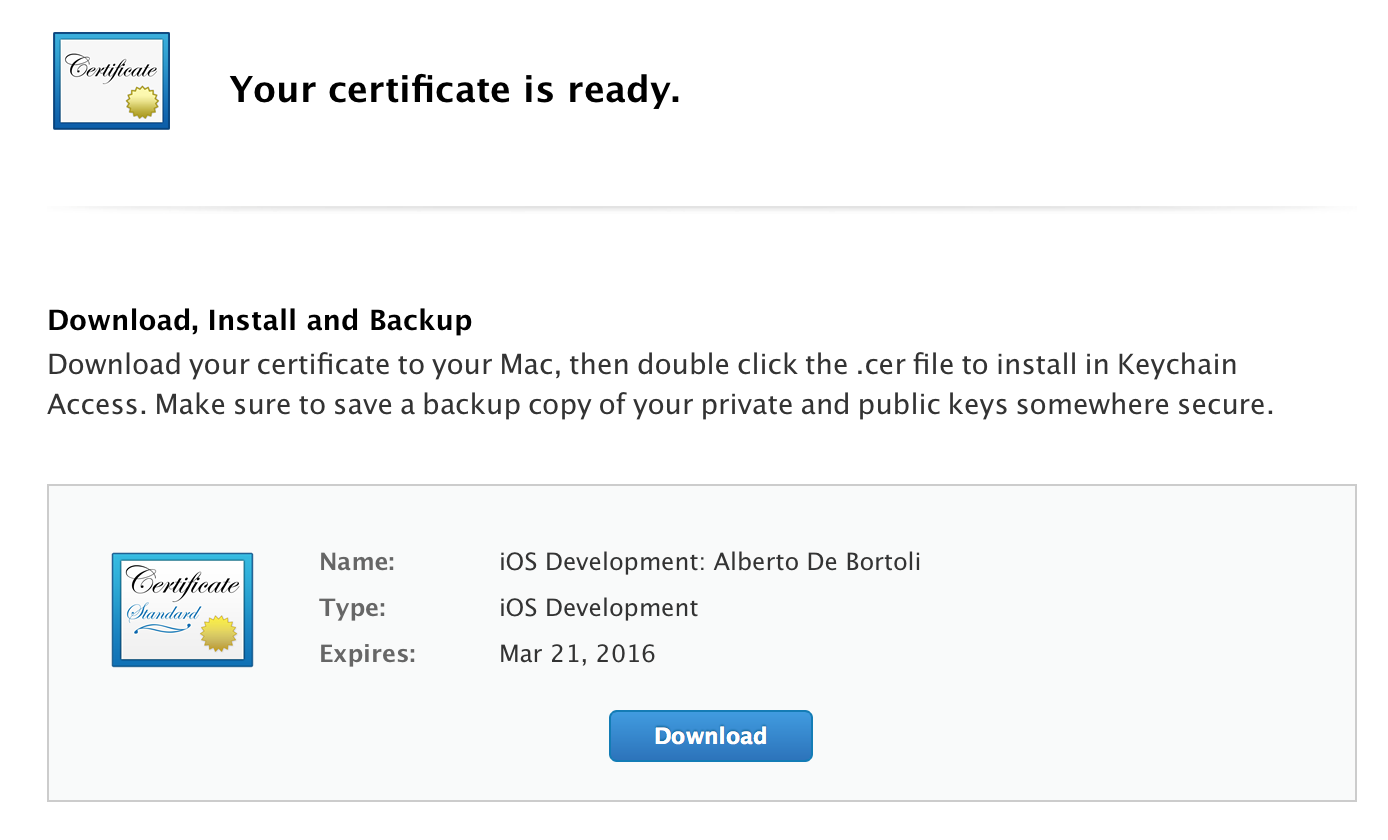 When you install it, it will appear in the Keychain Access with an ID (the so-called Identity) in parenthesis like so: 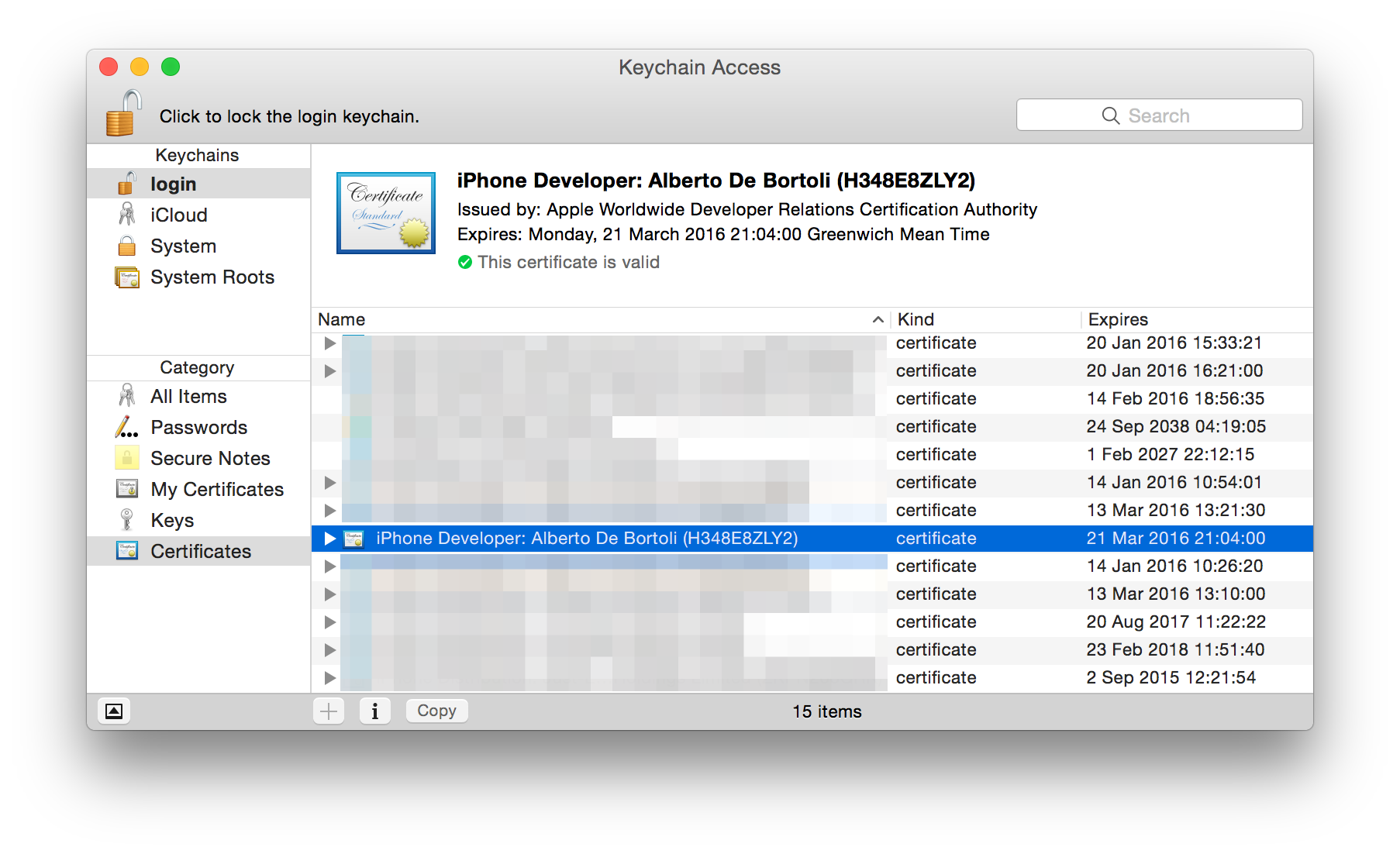 and the other way around

If you want to export the whole thing to another machine, select the couple and export.

If interested in the certificate info, select info from the drop down menu. It has been issued by an Apple CA (Certification Authority) and it includes the public key. 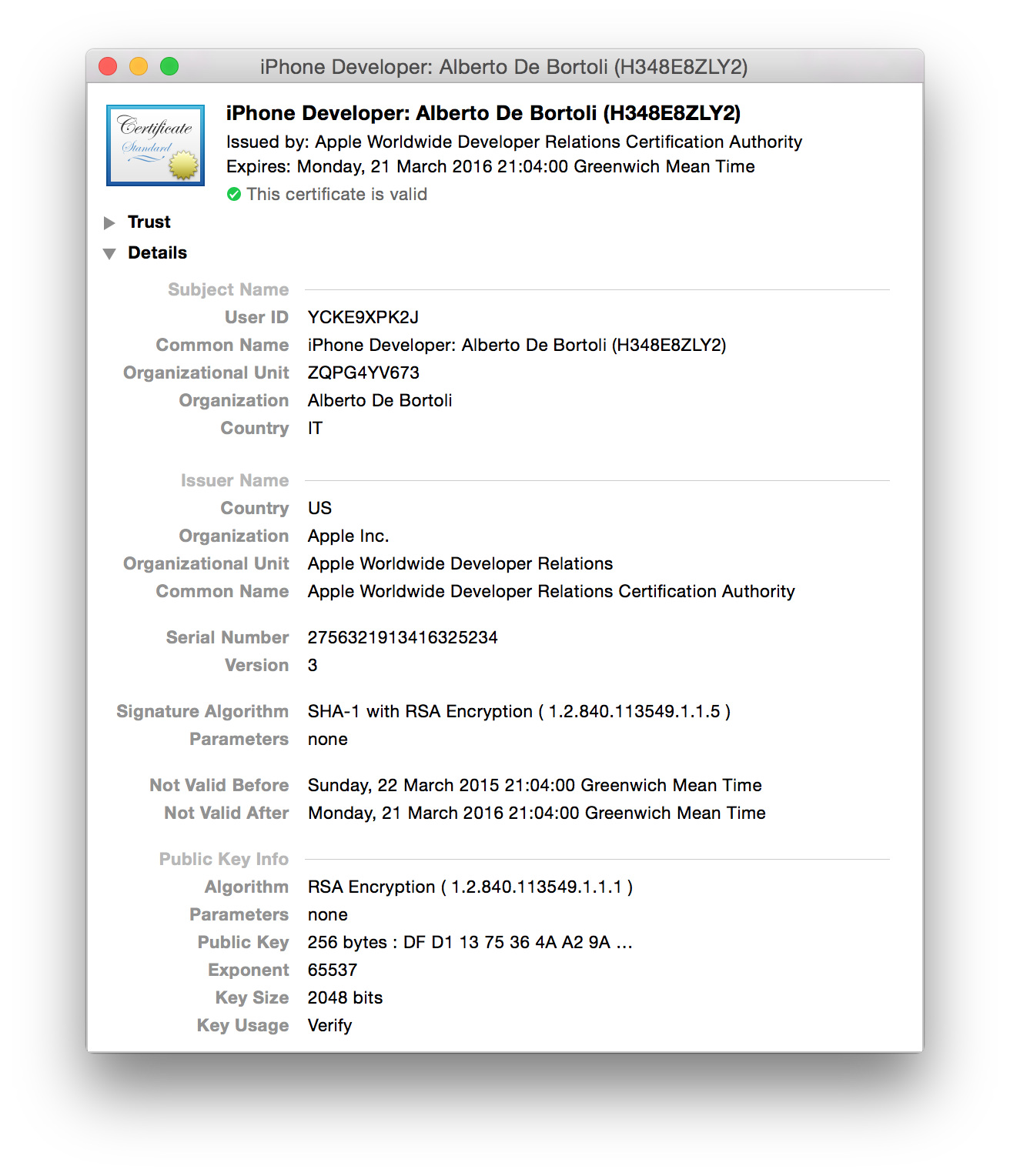 At its core an X.509 certificate is a digital document that has been encoded and/or digitally signed according to RFC 5280. In the X.509 system, a certification authority issues a certificate binding a public key to a particular distinguished name.

Now it's time to create an App ID. Nothing too fancy here if you stick to the rule:

One App ID per App

Try to avoid wildcard to match multiple apps. It hurts when you decide to add App Services (like Push Notifications) later on. Insert the Bundle ID of your app. I usually stick to this reverse domain schema com.yourdomain.yourapp.buildtype (e.g. com.albertodebortoli.iHarmony.beta).

At the very basic, you get something like so: 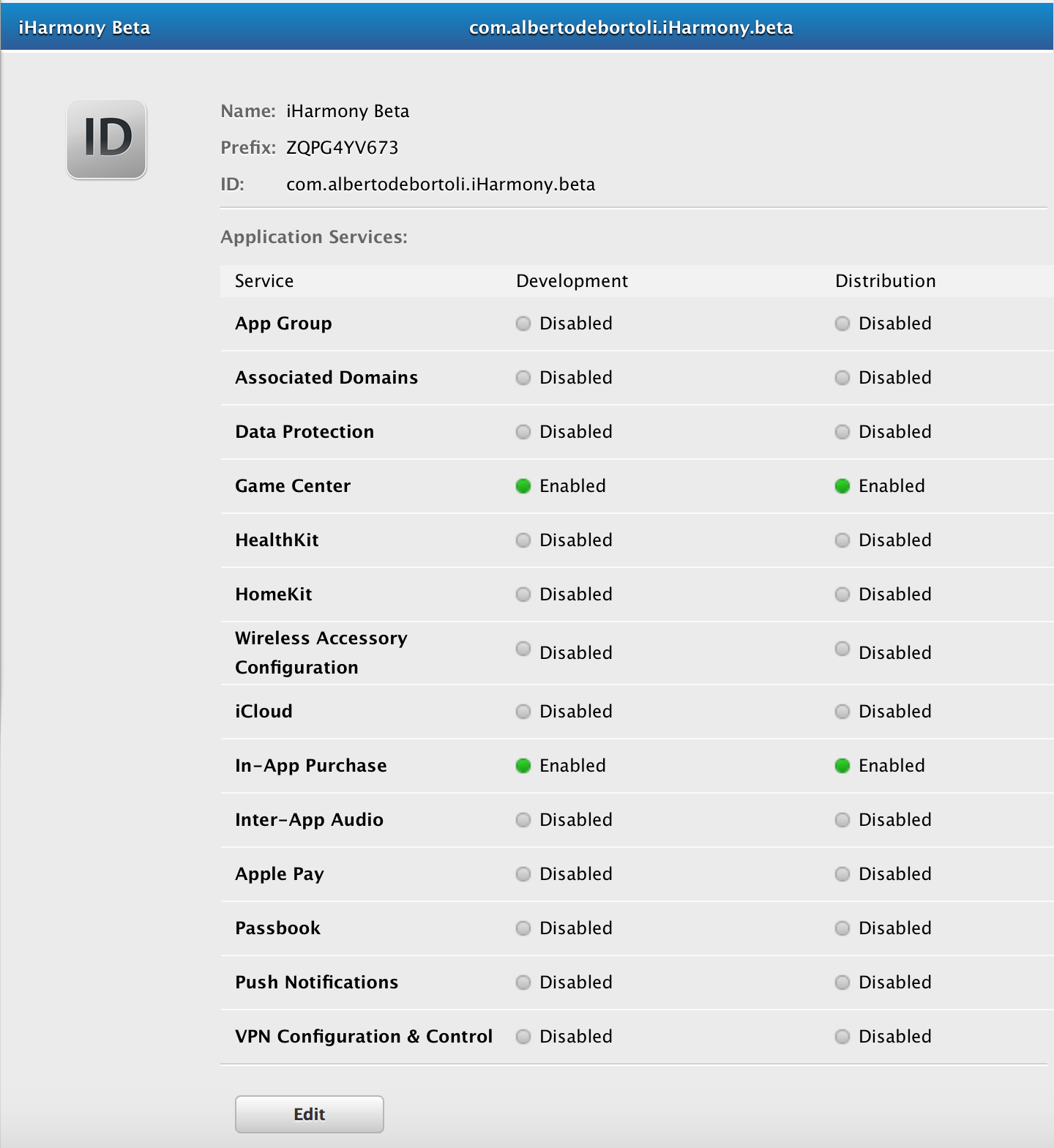 Time to create a Provisioning Profile: it's something that allows your application to run on your devices. It is a collection of your iOS Development Certificate, UDID and your App Id. Without a provisioning profile you cannot install your apps on your development devices.

Here sections are, one more time, Development and Production, like it was for the certificates.

Let's go for through the Development flow. Select 'iOS App Development'. Select the App ID just created, select the devices you want to enable (if it's a development provisioning profile), link the certificate previously generated that will be included in the Provisioning Profile and pick a name for it. I usually stick with this schema <App Name> <Build Type> <Date of PP generation> <Environment Type> PP.

Create a new Xcode project. Set the bundle id to the one picked previously. Go to Build Settings and filter for "code signing".

Set the values "Code Signing Identity" (the certificate) and "Provisioning Profile" (the provisioning profile) like so:

Make sure you have setup the correct Bundle ID in the Info.plist file. When a new project is created it has something like com.albertodebortoli.iHarmony.beta.$(PRODUCT_NAME:rfc1034identifier), you might want to remove the last part and prefer having an explicit string to avoid the following error in the General pane of your target (you might need to restart/play around with Xcode to make it get the change).

If you already are part of other teams (i.e. different Developer Program Licenses), you have to pick the right one. Now you should be able to build on device and (if you've done the same step for Production) archive for App Store/Ad Hoc Distribution.

There is so much more to say about code signing and especially about the errors and the headaches you get from it. Apple created some great documentation over the last 7 years.

The journey of Apple Pay at Just Eat

From the Eyes of an iOS Dev at JUST EAT

It has been almost 6 months since my last blog post. Things…